COVID-19 UPDATE: WE ARE OPEN AND DELIVERING AS NORMAL

Door Panelling and Its Effect on Door Proportions 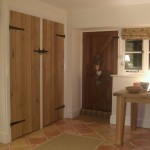 Contemporary or classic? Probably the most commonly asked question regarding the choice of door for a home, closely followed by 'painted or natural finish?' But the choice of door style may not be confined to the fashion considerations but the possibility of using the door panelling and construction patterns to change the perceived size of the door, the doorway it sits in and therefore the proportions of the room surrounding it. Whilst specifically chosen panelling won't transform a broom cupboard into a banquet hall it's a small trick of the eye worth knowing that may stop you buying the wrong door for your room or ceiling heights.

As seen on QI, there is another optical illusion associated with doors. The standard heights for two hinges on doors in the UK is 6” from top of the door and 9” from the bottom of the door. This is because the eye foreshortens the height to make the hinges look more equal in distance from the respective door ends. Now consider the two rectangles shown below. Each rectangle contains a single vertical line in the centre but due to the opposing angles at the top and bottom of the line they appear very different lengths. The vertical line in the right hand box appears considerably longer. In fact, if you measure them you will find that they are exactly the same length. 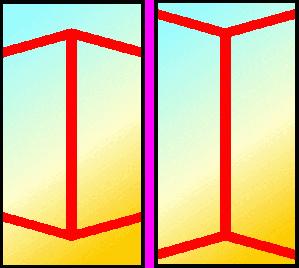 Playing with the panel designs changes the perception of the height and width of a door and therefore its surroundings by mild optical illusion. So two doors of exactly the same height, width and finish but with different panelling designs will appear slightly different in size due to the mild optical illusion created. This can be taken advantage of to deliberately give a different feel to a rooms dimensions in exactly the same way fashion gurus like Gok Wan recommend different clothing styles for different body shapes to accentuate or hide a person's body proportions.

For example, to make the door appear relatively thinner choose a door with wide block panels like the four panel internal door. The four wide block panels will make the door appear taller in proportion to its width. It is commonly misconstrued that the opposite is true but countless scientific tests going back over a hundred years have proved horizontal lines to be thinning.

Some internal doors on the other hand, with vertical slats in one central panel running from top to bottom

rail, will appear fatter in proportion to its height as a result. However, something like the Victorian Six Panel Internal Door is a versatile pattern well suited to most rooms of any dimension due to its 6 panels of varying length.

As stated above, the effect of different door styles won't transform the proportions inside or outside a house. However, it's impossible to deny that the eye plays tricks with its perception of its surroundings and the different interior doors and different exterior doors can take advantage of this knowledge for effect.

This entry was posted in Blog, Oak Door Articles on April 5, 2013 by will. ← Previous Post Next Post →