How to fit oak skirting boards in a curved bay window 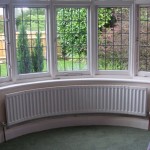 This is a question that has cropped up a few times recently with some of our customers so we thought it was time to put a guide together! How to fit your skirting boards into place when you have a curved bay window or other curved wall.

One of the more tricky wood working jobs is bending wood, especially oak. Interestingly it is usually easier with the hard woods than the soft woods but in either case it's a delicate task that requires some skill and patience. The way wood is constructed gives it the many possibilities for beautiful natural looking finishes with waxes or oils. But it is exactly these properties that also give it its tendency to crack and split when bent under pressure. When sanded down and properly finished it is the grain of the wood that adds so much depth to furniture or other wooden items about the home but it is also however the grain of the wood that means it will crack if bent out of shape.

One such area of home improvement that may well lead the DIYer to their first foray into wood bending is when trying to fit oak skirting boards into a curved bay window. The novice DIYer will lose several skirting boards early on in the hopeful desire that just because the first board snapped because the curve is too tight it's no reason the second one will too but after the fourth board snaps it's time to put the kettle on and resign yourself to learning some new tricks. 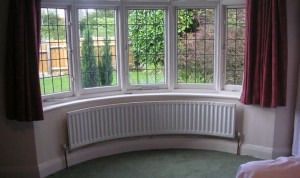 There are several ways to bend wood but we will focus on the most commonly used methods to fit skirting boards. This means this guide won't cover laminate form bending because most people won't go to the trouble of building bespoke skirting boards from progressive layers of laminates – they will have purchased a suitable skirting board type for the whole house.

The first type of way to bend wood is the 'Kerf Cut' method. When the skirting board is bent in its original form the inside of the board tries to compress just as the outside of the curve tries to stretch. The result is the wood cracks. The Kerf Cut method has small cuts made in the inside face of the board allowing the inside face to compress as it is bent. This is a difficult technique and it is easy to make the exposed face of the finished skirting board look very messy. Done correctly the cuts should be made from top to bottom edges no deeper than two thirds the depth of the board and about 25mm apart and requires a circular saw for accuracy. When the board is fitted in to the bay corner the gaps should close up. Sometimes a veneer can be added over the top.

Another way to bend skirting boards to fit curved bay windows is to use a jig and some water. This method can't be rushed but is more likely to give a better finish for the less experienced DIYer. By using a jig you'll need to find somewhere suitable where the board can be gradually bent in to shape over about a week undisturbed. It simply requires the DIYer to put the oak skirting board in a home constructed jig that keeps the board in a curved position and then add water daily.

When the oak skirting board is wet it keeps some of the curve as it dries allowing it to be possible for more curve to be added the following day. A gradual process of wetting the wood, which softens it too and adding more curve to the jig means after a week (don't rush it!) the board should retain enough of the final curve when released from the jig. When using this method be careful not to end up with a 'V' formation curve instead of a 'C' formation curve. The simplest jig people use is to put the board on top of two bricks at either end and two bricks in the middle on top. This weights down the board in the middle giving it a gentle curve. The height of the bricks at the ends can then be raised as each day progresses but sometimes this can result in the 'V' shape which won't fit the bay corner well.

A final note; be careful when first offering the board up to the wall. Even despite the treatments suggested above it is still a decisive moment and it can be useful to have a helper that can help offer up the board in a gentle curve rather than one person pushing it in the centre alone. It's such a waste if it's taken a week to treat the wood in a jig only to break it at the final hurdle. Good Luck!

This entry was posted in 'How To' Guides, Blog, Oak Door Articles, Resources, Oak Accessories Posts on November 4, 2011 by will. ← Previous Post Next Post →